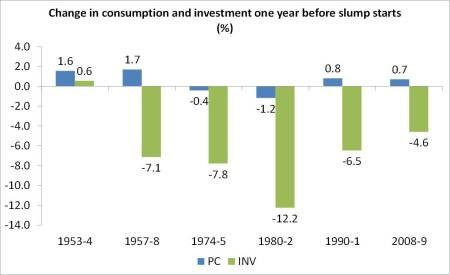 Recently Ben Bernanke, former head of the US Federal Reserve during the great credit boom of the early 2000s, has revived his version of ‘financialisation’ as the cause of crises.  For him, crises are the result of ‘financial panics’ – ie people just lose their heads and panic into selling and calling in their credits in a completely unpredictable way (“Although the panic was certainly not an exogenous event, its timing and magnitude were largely unpredictable, the result of diverse structural and psychological factors”).  In his latest revival, Bernanke considers empirically any connection between ‘financial variables’ like credit costs and ‘real economic activity’.  He concludes that “the empirical portion of this paper has shown that the financial panic of 2007-2009, including the runs on wholesale funding and the retreat from securitized credit, was highly disruptive to the real economy and was probably the main reason that the recession was so unusually deep.”
But when we look at the evidence provided, Bernanke has to admit that “balance sheet factors (ie changes in debt etc) do not forecast economic developments well in my setup.” In other words, his conclusions are not supported by his own empirical results. “It may be that both household and bank balance sheets evolve too slowly and (comparatively) smoothly for their effects to be picked up in the type of analysis presented in this paper.”
And yet there is plenty of evidence for the Marxist view that it is a collapse in profitability and profits in the productive sectors that is the necessary basis for a slump in the 'real' economy.  All the major crises in capitalism came after a fall in profitability (particularly in productive sectors) and then a collapse in profits (industrial profits in the 1870s and 1930s and financial profits at first in the Great Recession).  Wages did not collapse in any of these slumps until they started.
In a chapter of our new book, World in Crisis, G Carchedi provides compelling empirical support for Marx’s law of profitability showing the link between the financial and productive sectors in capitalist crises.  From the early 1980s, the strategists of capital tried to reverse the low profitability reached then.  Profitability rose partly through a series of major slumps (1980, 1982, 1991, 2001 etc).  But it also recovered (somewhat) through so-called neoliberal measures like privatisations, ending trade union rights, reductions in government and pensions etc.
But there was also another countertendency: the switch of capital into unproductive financial sectors. “Faced with falling profitability in the productive sphere, capital shifts from low profitability in the productive sectors to high profitability in the financial (i.e., unproductive) sectors. But profits in these sectors are fictitious; they exist only on the accounting books. They become real profits only when cashed in. When this happens, the profits available to the productive sectors shrink. The more capitals try to realize higher profit rates by moving to the unproductive sectors, the greater become the difficulties in the productive sectors. This countertendency—capital movement to the financial and speculative sectors and thus higher rates of profit in those sectors—cannot hold back the tendency, that is, the fall in the rate of profit in the productive sectors."
Financial profits have claimed an increasing share of real profits throughout the whole post–World War II phase. “The growth of fictitious profits causes an explosive growth of global debt through the issuance of debt instruments (e.g., bonds) and of more debt instruments on the previous ones. The outcome is a mountain of interconnected debts. ….But debt implies repayment. When this cannot happen, financial crises ensue. This huge growth of debt in its different forms is the substratum of the speculative bubble and financial crises, including the next one. So this countertendency, too, can overcome the tendency only temporarily. The growth in the rate of profit due to fictitious profits meets its own limit: recurring financial crises, and the crises they catalyze in the productive sectors.”
What Carchedi finds is that “Financial crises are due to the impossibility to repay debts, and they emerge when the percentage growth is falling both for financial and for real profits.“ Indeed, in 2000 and 2008, financial profits fall more than real profits for the first time. 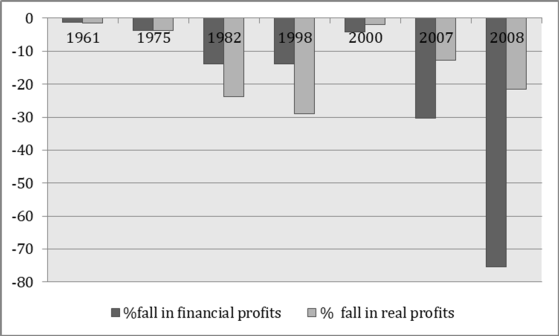 Carchedi concludes that “It is held that if financial crises precede the economic crises, the former determine the latter, and vice versa.  But this is not the point. The question is whether financial crises are preceded by a decline in the production of value and surplus value…The deterioration of the productive sector in pre-crisis years is thus the common cause of both financial and non-financial crises. If they have a common cause, it is immaterial whether one precedes the other or vice versa. The point is that the (deterioration of the) productive sector determines the (crises in the) financial sector.”
By rejecting Marx’s law of value and the law of profitability, the post-Keynesian ‘financialisation’ school opts for the idea that the distribution between profits and wages; rising inequality and debt; and above all, an inherent instability in finance that causes crises.  Actually, it is ironic that these radical followers of Keynes look to the dominance of finance as the new form of (or stage in) capital accumulation because Keynes thought that capitalism would eventually evolve into a leisure society with the ‘euthanasia of the rentier’ ie the financier, would disappear.  It was Marx who predicted the rise of finance alongside increasing centralisation and concentration of capital.
The rejection of changes in profits and profitability as the cause of crises in a profit-driven economy can only be ideological.  It certainly leads to policy prescriptions that fall well short of replacing the capitalist mode of production.  If you think finance capital is the problem and not capitalism, then your solutions will fall short.
In the Epstein book, various policy prescriptions for dealing with the evil of “excessive financialisation” are offered.  Grabel (chapter 15) wants “taxes on domestic asset and foreign exchange transactions – so-called Keynes and Tobin taxes – reserve requirements on capital inflows (so-called Chilean regulations), foreign exchange restrictions, and so-called trip-wires and speed bumps, which are early warning systems combined with temporary policies to slow down the excessive inflows and/or outflows of capital.” Pollin reckons that by “taxing the excesses of financialization and channeling the revenue appropriately, governments can help to restore public services and investments which, otherwise, are among financialization’s first and most severe casualties.”  This is no more radical than the policy prescriptions of Joseph Stiglitz, the ‘progressive’ Nobel prize winning economist who said, “I am no left-winger, I’m a middle of the road economist”.
Most important, if 'financialisation is not the cause, such reforms of finance won’t work in ending rising inequality or regular and recurring slumps in economies.  The financialisation school needs to remember what one of its icons, Joan Robinson once said: “Any government which had both the power and will to remedy the major defects of the capitalist system would have the will and power to abolish it altogether”.