It’s ten years on to the day since the global financial crash began with the news that the French bank, BNP had suspended its sub-prime mortgage funds because of “an evaporation of liquidity”.

Within six months, credit tightened and inter-bank interest rates rocketed (see graph above).  Banks across the globe began to experience huge losses on the derivative funds that they had set up to profit from the housing boom that had taken off in the US, but had started to falter.  And the US and the world entered what was later called The Great Recession, the worst slump in world production and trade since the 1930s.

The mass of profit began to fall in the US in 2006, more than a year before the credit crunch struck in August 2007.  Falling profits meant over-accumulation of capital and thus a sharp cutback in investment.  A slump in production, employment and incomes followed i.e. The Great Recession.

Since the end of that recession in mid-2009, most capitalist economies have experienced a very weak recovery, much weaker than after previous post-war recessions and in some ways even weaker than in the 1930s.  A recent Roosevelt Institute report by JW Mason found that “there is no precedent for the weakness of investment in the current cycle. Nearly ten years later, real investment spending remains less than 10 percent above its 2007 peak. This is slow even relative to the anemic pace of GDP growth, and extremely low by historical standards.”
So the Great Recession became the Long Depression, as I described it, a term also adopted by many others, including Keynesian economists like Paul Krugman and Simon Wren-Lewis.  Why did the Great Recession not lead to a ‘normal’ economic recovery to previous investment and production rates? The mainstream economists of the monetarist school argue that governments and central banks were slow in cutting interest rates and adopting ‘unconventional’ monetary tools like quantitative easing.  But when they did, such policies appeared to have failed in reviving the economy and merely fuelled a new stock market and debt boom.
The neoclassical school reckons that debt should be cut back as it weighs on the ability of companies to invest while governments ‘crowd out’ credit because of their high levels of borrowing.  This ignored the reason for high government debt, namely the huge cost of bailing out banks globally and the slump in tax revenues from the recession.  In opposition, the Keynesians say the Long Depression was all due to ‘austerity’ ie governments trying to reduce government spending and balance budgets.  But the evidence for that conclusion is not compelling.
What the neoclassical, Keynesian and heterodox views have in common is a denial for any role for profit and profitability in booms and slumps in capitalism!  As a result, none look for an explanation for low investment in low profitability.  And yet the correlation between profit and investment is high and continually confirmed and profitability in most capitalist economies is still lower than in 2007.

After ten years and a decidedly long, if very weak, economic recovery phase in the ‘business cycle’, are we due for another slump soon?  History would suggest so.  It won’t be triggered by another property slump, in my view.  Real estate prices in most countries have still not recovered to 2007 levels and even though interest rates are low, housing transaction levels are modest.
The new trigger is likely to be in the corporate sector itself.  Corporate debt has continued to rise globally, especially in the so-called emerging economies.  Despite low interest rates, a significant section of weaker companies are barely able to service their debts.  S&P Capital IQ noted that a record stash of $1.84trn in cash held by US non-financial companies masked a $6.6trn debt burden. The concentration of cash of the top 25 holders, representing 1% of companies, now accounts for over half the overall cash pile. That is up from 38% five years ago.  The big talk about the hegemoths like Apple, Microsoft, Amazon having mega cash reserves hides the real picture for most companies. 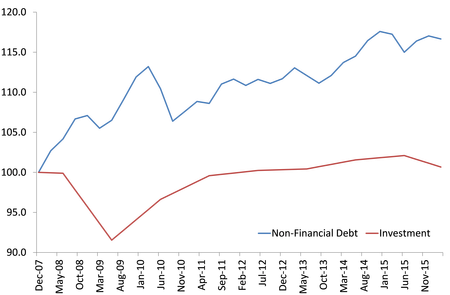 Profit margins overall are slipping and in the US non-financial corporate profits have been falling. 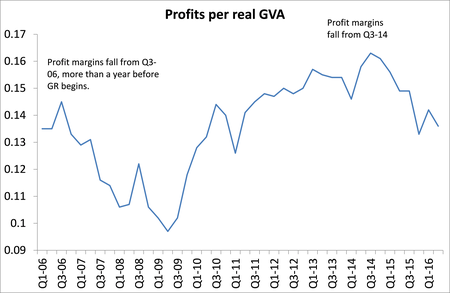 And now central banks, starting with the US Federal Reserve, have started to reverse ‘quantitative easing’ and hike policy interest rates.  The cost of borrowing and existing debt servicing will rise, just at a time when profitability is flagging.