Clique aqui :Al-Qaeda Gets An Oscar
The marketing of Hollywood anti-Syria propaganda is impressively seen in the following AFP photograph, which was viralized on various social media. The backstory involves two gods of Olympus, who came down with puppets, to bring good cheer to traumatized Syrian children. The viralization showed that “it pays to advertise.” Hearts and souls were moved to tears, at the sight of the gods – humanitarians bringing smiles to the faces of these poor children, even if just for a too short respite. 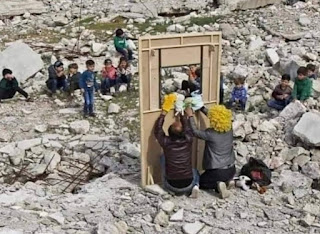