A comparable incidents happened in 2001 in the United States. Envelopes with Anthrax spores were sent to various politicians. Some people died. The White House told the FBI to blame al-Qaeda but the Anthrax turned out to be from a U.S. chemical-biological weapon laboratory.  The case is still unsolved.
The 'whistle-blower' Vil Mirzanyanov who 'revealed' the 'Novichok' program and its poisons published chemical formulas that should enable any decent laboratory to reproduce them. But neither the existence of the claimed program nor the existence of the alleged substances were ever accepted by the scientific community. The Russian government says it does not know the program nor the alleged poisons.
The highly constructed drama around the alleged poisoning of a British double agent Skripal and his daughter has thus turned into a surreal play. The British government has so far given no evidence that the Skripal's were poisoned at all, or that they were poisoned by someone else. No detailed medical bulletin was published. The British accusations against Russia lets one assume that a suicide attempt has been excluded. Why?
There is no independent evaluation of the alleged poison. The British government claims that its own chemical weapon laboratory at Porton Down, only a few miles from where the incident happened, has identified the poison as one of the 'Novichok' chemicals.
But in 2016 a leading chemist at Porton Down had doubts that such chemicals exist. (Paul McKeigue, Professor of Statistical Genetics and Genetic Epidemiology at Edinburgh University, Piers Robinson, Professor of Politics, Society and Political Journalism at Sheffield University and the former British Ambassador Craig Murray point this out):

As recently as 2016 Dr Robin Black, Head of the Detection Laboratory at the UK’s only chemical weapons facility at Porton Down, a former colleague of Dr David Kelly, published in an extremely prestigious scientific journal that the evidence for the existence of Novichoks was scant and their composition unknown.

In recent years, there has been much speculation that a fourth generation of nerve agents, ‘Novichoks’ (newcomer), was developed in Russia, beginning in the 1970s as part of the ‘Foliant’ programme, with the aim of finding agents that would compromise defensive countermeasures. Information on these compounds has been sparse in the public domain, mostly originating from a dissident Russian military chemist, Vil Mirzayanov. No independent confirmation of the structures or the properties of such compounds has been published. (Black, 2016)
Robin Black. (2016) Development, Historical Use and Properties of Chemical Warfare Agents. Royal Society of Chemistry

The Scientific Advisory Board of the Organization for the Prohibition of Chemical Weapons (OPCW) has not recognized Novichoks as chemical weapons because it found scant evidence that they exist at all. The U.S. and the UK are both part of the organization and both agreed with this evaluation:

[The SAB] emphasised that the definition of toxic chemicals in the Convention would cover all potential candidate chemicals that might be utilised as chemical weapons. Regarding new toxic chemicals not listed in the Annex on Chemicals but which may nevertheless pose a risk to the Convention, the SAB makes reference to “Novichoks”. The name “Novichok” is used in a publication of a former Soviet scientist who reported investigating a new class of nerve agents suitable for use as binary chemical weapons. The SAB states that it has insufficient information to comment on the existence or properties of “Novichoks”. (OPCW, 2013)

The former Soviet scientist, Vil Mirzanyanov, who 'blew the whistle' and wrote about the 'Novichoks', now lives in a $1 million home in the United States. The AFP news agency just interviewed him about the recent incident:

Mirzayanov, speaking at his home in Princeton, New Jersey, said he is convinced Russia carried it outas a way of intimidating opponents of President Vladimir Putin."Only the Russians" developed this class of nerve agents, said the chemist. "They kept it and are still keeping it in secrecy."
The only other possibility, he said, would be that someone used the formulas in his book to make such a weapon.

"Russia did it", says Mirzanyanov, "OR SOMEONE WHO READ MY BOOK". 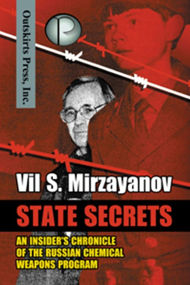 1, 2
The book was published in 2008 and is available as hardcover, paperback or for $8.16 as an electronic file. It includes a number of formulas which, Mirzanyanov says, could be used to produce those chemical agents. But neither Porton Down nor the OPCW seem convinced that this is possible. They may believe that Mirzanyanov is just full of it.
One customer reviewing Mirzanyanov's book remarked:

[Needs] an editor to throttle back his epic "i'm an epic awesome martyr" stuff and stick to the science.

State secrets is by far the most long winded and painfully slow novel on chemical weapons written by a disgruntled defected scientist from Russia I have ever read! If you want to hear an employ with delusions of grandeur moan about every person he ever worked with then this is the book for you, otherwise don't waste your sweet time. Seriously! Nothing happens except Vil somethingkov helps make things that kill people for 30 years, gets a (sort of) conscience, defects, and constantly whinges about.....everything.

Vil Mirzanyanov promoted his book in a 2009 video. Shortly after he published his book he blogged an explanation why he included formulas in it:

While I was writing my book “State Secrets: An Insider’s Chronicle of the Russian Chemical Weapons Program”, some people from Washington persistently advised me not to include the formulas of the chemical agents of the Novichok series in my book.
...
I asked why it would be a bad idea to publish this information, since it would be for the safety of all people. Then the governments would work to have those chemical agents and their precursors included into the Control List. They responded, “Terrorists could use them for their criminal actions.” This kind of reasoning is used all the time now to scare people and prevent any discussion. We are already used to ignoring a lot of real problems thanks to that.

Mirzanyanov further points out that experienced personal in well equipped laboratories would be able to use his formulas. State actors have such laboratories, like the British Porton Down, but terrorists do not have such capabilities.
Mirzanyanov urged to included the substances he described into the OPCW list of controlled material. But the OPCW, as seen above, rejected that. Neither its scientific board nor the head of the Porton Down detection laboratory were convinced that these substances or the Soviet program Mirzanyanov described existed at all.
The Soviet chemical weapon laboratory in which Mirzanyanov had worked was in Uzbekistan, not in Russia as Theresa May falsely claims. The laboratory was dismantled with the active help of the United States.
Theresa's May claims that the Skripals were poisoned with 'Novichok' agents is highly questionable. Her claim that only Russia could be responsible for the Skripal incident is obviously bollocks.
The existence of the substances as described by Vil Mirzanyanov is in serious doubt. But if he is right then any state or company with a decent laboratory and competent personal can produce these substances from the formulas and descriptions he provides in his book. That is at least what Mirzanyanov himself says.
But most disturbing about the case are not the false claims Theresa May makes. She is in deep political trouble over the Brexit negotiations and other issues and needs any political diversion that she can get. Blaming Russia for 'something' is en vogue and might help her for a while.
No, the most troubling issue is the behavior of the media who fail to point out that May's claims are bluster and that there is no evidence at all that supports her claims. The only paper that is somewhat skeptical is the Irish Times which finds it highly unlikely that the Russian government is behind the poisoning.
May demanded and got a NATO meeting on the case. But the statement NATO issued afterwards was extremely weak. It only offered support in conducting the British investigation and it asked Russia to respond to the British questions. Neither did it support the claims May made, nor did it take any measures against Russia. A French spokesperson said "We don’t do fantasy politics" and demanded 'definite conclusions' on the case before deciding anything. No support was given to May by the Trump administration (Update: U.S. ambassador to the UN Nick Haley has now jumped to May's aid.)
The story May wants to tell has way too much holes to be sustainable. The involvement of the British double agent Skripal in the fake Steele dossier about Trump is likely the real story behind the incident. No international support is coming for May. The British opposition leader Corbyn was right today when he demanded that she produces evidence for her claims. A few more pushes and her house of cards will surely come down.
Posted by b on March 14, 2018 at 03:17 PM
Publicada por Pena Preta à(s) quinta-feira, março 15, 2018