CIA head Pompeo, the new Secretary of State, is a neoconservative with a racist anti-Muslim attitude and a special hate for Iran which he compared to ISIS. That he will now become Secretary of State is a bad sign for the nuclear agreement with Iran. The Europeans especially should take note of that and should stop to look for a compromise with Trump on the issue. The deal is now dead. There is no chance that a compromise will happen.
The new CIA director Gina Haspel is well known for actively directing and participating in the torture of prisoners at 'black sites':

Beyond all that, she played a vital role in the destruction of interrogation videotapes that showed the torture of detainees both at the black site she ran and other secret agency locations. The concealment of those interrogation tapes, which violated multiple court orders as well as the demands of the 9/11 commission and the advice of White House lawyers, was condemned as “obstruction” by commission chairs Lee Hamilton and Thomas Keane.

Haspel would be in jail if former president Barack Obama had not decided against prosecuting the CIA torture crimes. Torturing prisoners is a war crime. Obstruction of courts and destruction of evidence are likewise crimes.
Both, Pompeo and Haspel, will need to be confirmed by Congress. Both will receive a significant number of 'yes'-votes from the Democratic side of the aisle.

Today the British government made some dubious assertions about Saddam's chemical weapons the poisoning of its double agent Sergej Skripal. 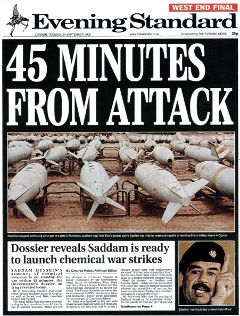