Updated below
An alleged new 'chemical incident' in Syria reminds of a similar series of events we saw last year. We are told to believe that each time the U.S. pulls back from the war on Syria the Syrian government is responding with a 'chemical attack' that pulls the U.S. back in.
March 30 2017
U.S. priority on Syria no longer focused on 'getting Assad out': Haley

NEW YORK (Reuters) - The United States’ diplomatic policy on Syria for now is no longer focused on making the war-torn country’s president, Bashar al-Assad, leave power, the U.S. ambassador to the United Nations said on Thursday, in a departure from the Obama administration’s initial and public stance on Assad’s fate.

World leaders expressed shock and outrage Tuesday at reports of a suspected chemical attack in northwestern Syria that killed scores of civilians, with one UK official suggesting the incident amounted to a war crime.

The U.S. military attacked a Syria-government airfield with 59 Tomahawk missiles on Thursday evening.

The US ambassador to the United Nations, Nikki Haley, has told CNN that removing Syrian President Bashar al-Assad from power is a priority, cementing an extraordinary U-turn in the Trump administration's stance on the embattled leader.

The Khan Sheikhun incident had been faked. An international investigation found that half of the alleged casualties arrived in hospitals before the incident was said to have happened. Nothing followed after Haley's last announcement. The administration was apparently not willing to go beyond the one-off strike. The flip-flop was attributed to confusion or infighting within the Trump administration.
A year later the exactly same development can be observed.
March 29 2018
Trump says US will withdraw from Syria 'very soon'

A poison gas attack late Saturday on a rebel-held town near Syria's capital has killed at least 40 people, activists, rescuers and medics said.

April 7 2018
U.S. State Department On the Chemical Attack in Douma

We continue to closely follow disturbing reports on April 7 regarding another alleged chemical weapons attack, this time targeting a hospital in Douma, Syria. Reports from a number of contacts and medical personnel on the ground indicate a potentially high number of casualties, including among families hiding in shelters. These reports, if confirmed, are horrifying and demand an immediate response by the international community.

Many dead, including women and children, in mindless CHEMICAL attack in Syria. Area of atrocity is in lockdown and encircled by Syrian Army, making it completely inaccessible to outside world. President Putin, Russia and Iran are responsible for backing Animal Assad. Big price...
....to pay. Open area immediately for medical help and verification. Another humanitarian disaster for no reason whatsoever. SICK! 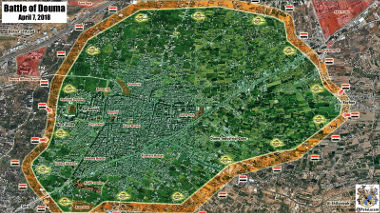 bigger
Over the last months the Syrian army secured 90% of 'rebel' enclave in east-Ghouta right next to  the Syrian capital Damascus. Only the town of Douma, held by the Saudi financed Salafist Takfiris of Jaish al-Isalm, was left in enemy hands. Negotiations about an evacuation of the terrorist were ongoing. At one point last week the hard core leaders of Jaish al-Islam pulled their negotiators back from the talks and reportedly executed them. Jaish al-Islam wanted to essentially stay in place and keep all its weapons. The Russian negotiators did not agree with this. On Friday the negotiations failed.
Barrages of missiles and grenades from Douma hit Damascus. The 'rebel' supporting Syrian Observatory reported of several killed in Damascus and dozens of wounded. The Syrian army hit back with intensive air strikes and artillery fire on Douma.
The terrorist in Douma hold several thousand of hostages who were abducted in 2013 from the town of Adra. The prisoners were paraded around in cages. The abducted men were forced to dig the extensive tunnel network Jaish al-Isalm uses to hide its weapons and fighters.
Two years ago Jaish al-Islam admitted that it used chemical weapons against a Kurdish suburb of Aleppo. Just two days ago the Russian military command said that it detected 'rebel' preparations for new false flag gas attacks.
Now the terrorists and their supporters claim that a new "chemical weapon attack" happened and blame the Syrian government. A video of the alleged gas attack aftermath shows a basement with some 30 dead children between two and 10 years old. They seem to have suffocated, probably from carbon monoxyd. Astonishingly there are no dead women or men - only children under 10.
Russia, which has observers on the ground, rejects any claims of Syrian government involvement in the incident.
It is quite obvious that the "chemical weapon attack" is a false flag event. The terrorist commit the crime and blame the Syrian government. They want the U.S. to attack the Syrian government.
Will Trump fall for this stunt and attack Syria? Or had he and his minions planned this series of events all along?
Added:
Trump and the U.S. military claim to "fight ISIS" but have completely stopped doing so. There are some 3,000 ISIS fighter in east Syria near the border with Iraq. Most of these are north of the Euphrates where U.S. troops are stationed. If Syrian government troops cross the Euphrates northwards the U.S. attacks them. But ISIS can cross the Euphrates southward and launches large attacks on Syrian government positions in east Syria:

[I]n a surprise attack, the militants stormed Boukamal on Monday, triggering heavy fighting before Iranian-backed Shiite militias beat them out, according to a war monitoring group and Syrian opposition activists with connections to the region. Approximately 400 Islamic State fighters crossed the Euphrates River and ambushed the town, according to the Syrian Observatory for Human Rights monitoring group, killed 11 pro-government fighters in clashes, and losing five of their own.From their desert territory, the ISIS militants have harassed forces at oil stations, as well, according to Mohammad al-Ayed, director of the Palmyra News Network.

Another group of ISIS fighters is in the south-eastern corner of Syria and under protection of U.S. forces stationed in al-Tanf, near Jordan.
Despite large concentrations of ISIS troops, air attacks of the U.S. coalition against ISIS have practically stopped.
US led Coalition strikes update 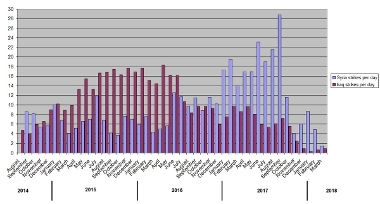 via Simla - bigger
Trump is playing theater to the crowd that wants the U.S. out of Syria. He claims that U.S. troops will leave soon. At the same time he is asking the Saudis to come up with $5 billion to pay for the U.S. 'service' of occupying a third country. Trump claims that he wants to eliminate ISIS, but the U.S. military is doing absolutely nothing to achieve such. On the contrary - it protects ISIS from Syrian government attacks.
Russia has troops embedded with every Syrian unit. Russia had warned that it will attack U.S. launching platforms, ships and air planes, should the U.S. strike at Syrian forces and thereby endanger its own soldiers.