"Estamos interessados em que peritos independentes da OPAQ", a Organização para a Proibição de Armas Químicas, participem nesse inquérito e, para que "cumpram as suas obrigações", devem "necessariamente deslocar-se ao local", disse
Russia’s foreign minister, Sergei Lavrov, has said Moscow will table a UN resolution calling for an independent inquiry into the chemical weapons attack in the Syrian town of Douma.
The announcement came as the White House said Donald Trump will skip an upcoming summit in South America to “oversee the American response to Syriaand to monitor developments around the world”.
The US president is consulting his British and French allies on a potential military strike on Syria after the use of chemical weapons in the Douma, the last rebel-held area of eastern Ghouta. Syrian opposition rescue workers and medics said more than 40 people died and hundreds injured in the poison gas attack.
Speaking in Moscow, Lavrov appeared to pre-empt a possible western strike on Syria, announcing that Russia would propose a “transparent and honest” investigation at the security council on Tuesday, with the involvement of the Organisation for the Prohibition of Chemical Weapons. Moscow has previously insisted there was no evidence for a chemical attack.
“If, under the pretext of a lack of security guarantees, those who employ anti-Russian arguments to pursue their Russophobic aims do not allow experts to come, then it will be a verdict on their true plans and show that they have no interest in establishing the truth,” Lavrov said.
The Syrian regime, which has denied any involvement in the attack, said on Tuesday that it has invited the chemical weapons watchdog to send a fact-finding mission into the country. 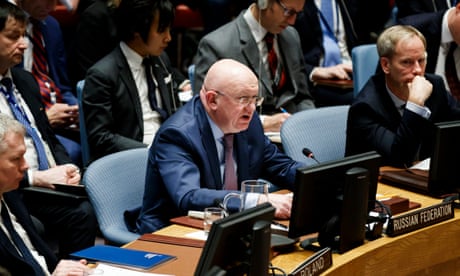 
Read more
Western countries are likely to be wary of a Russian proposal that would give its ally, the Syrian government, an upper hand over investigations on its territory. The US is to table its own resolution at the UN on the terms of an inquiry on Tuesday.
The OPCW has already set up a fact-finding mission, but will need
Russian government cooperation to visit the site of the attack, which is now under Syrian government control.
The UN secretary general, António Guterres, has called for a “thorough investigation using impartial, independent and professional expertise” and has reaffirmed his full support for the OPCW. He said international investigators “to be granted full access, without any restrictions or impediments to perform its activities”.
The OPCW on its own only has powers to determine whether a chemical weapons attack has occurred, but not to apportion responsibility for the attack.


A joint UN-OPCW body, known as the joint investigative mechanism, was designed to attribute responsibility for chemical weapons attacks, but the body’s mandate was not renewed last year after the west and Russia disagreed on how it should operate in the future, leading to Russia to veto its continuance.
Fresh UN discussions on a renewed JIM mandate failed in January when Russia insisted the JIM could not ascribe responsibility, but only provide a report to the security council. It also insisted no report could be valid unless it included an on site inspection by the OPCW inspectors.
It is not clear yet whether Lavrov is willing to drop these preconditions in this latest proposal, or the terms on which the OPCW will be allowed to visit the site. The issue, discussed in public and private by diplomats at the UN on Monday, will be discussed at the further meeting of the security council on Tuesday.